Established in 1823, the Brambach Piano Company was one of the earliest and largest piano manufacturing companies of late 19th and early 20th Centuries. Although they built pianos under the Brambach name, the Brambach Piano Factory produced pianos for dozens of other well-known American piano manufactures during the ‘teens and ‘twenties such as Kohler & Campbell, Mathushek, and many others. The Brambach factory was capable of building instruments in huge quantities, and their overall quality was very good and generally consistent. The Brambach name was discontinued in about 1957. Today, Brambach pianos are fairly common in our restoration shop, and they make very nice pianos after restoration.

From the Blue Book of Pianos on Brambach Pianos

The developments of an instrument so individual in character as the Brambach grand piano present the accumulative existence of many generations; each generation adding to its heritage and pointing the way to further advancement in the art to which this family had been devoted. It was, therefore, natural that the products of the Brambach factories were supreme in musical quality and purity of tone. Correctly made, theoretically and mechanically, the grand piano manufactured by the Brambach Piano Co. was the embodiment of artistic grace and individuality of tone. Realizing that a small grand, of suitable size for the average home, would not only fill a popular demand but would bring within the range of the music lovers a rich and Mellow tone possessing the same brilliancy and singing quality as the larger grands, the Brambach Piano Co. had centered special efforts upon the smallest grand made in this country. Every Brambach Grand piano contained the exclusive patented Brambach Tone Expander and guaranteed soundboard. The Tone Expander released and greatly increased the volume of tone, producing a volume of tone that was usually found in large size grands. The Brambach Player Grand combined the piano and a player mechanism of unmatched quality.

Every attention necessary was given construction, for the cases, actions, hammers, etc., was constructed in these modern factories. The piano actions used in the Brambach Grands were made in their entirety in the Brambach plant and embody a number of their own patents. These actions were conceded to be remarkable for their ease, reputation and durability. Also, make Reproducing Grand pianos containing the Auto deluxe Welte-Mignon Reproducing action. Brambach grands are made in three sizes, 4 feet 8 inches, 5 feet, 5 inches, respectively. The Brambach instruments are guaranteed by the manufacturers, whose financial responsibility is unquestioned. 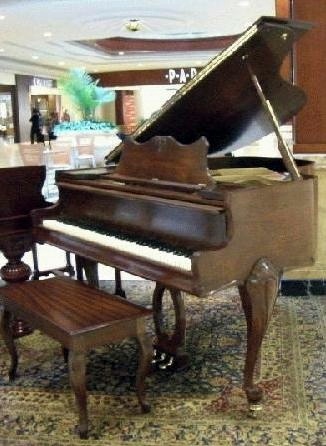 This is an example of piano restoration that we can do at Dunkley Music.  Take a look at the pictures of this Brambach Grand Piano that was completely refinished and restored.  They are pretty dramatic before and after pictures of it.

This Brambach Grand Piano is a nice French Provincial carved baby grand piano built by the Brambach Piano Company of New York. Brambach built pianos from about 1900-1957, and they were affiliated with the famous Kohler & Campbell Piano Company. This piano is made of real French walnut wood, and has been completely restored and refinished to like new condition. The least expensive, cheaply made new French Provincial baby grand pianos will cost you at least $10,000…this restored Brambach will be a much better instrument than one of those poor quality new pianos. This piano still has it’s original ivory keys which were restored rather than replaced. The tone of this piano is amazing for its size…everyone who hears it is impressed!