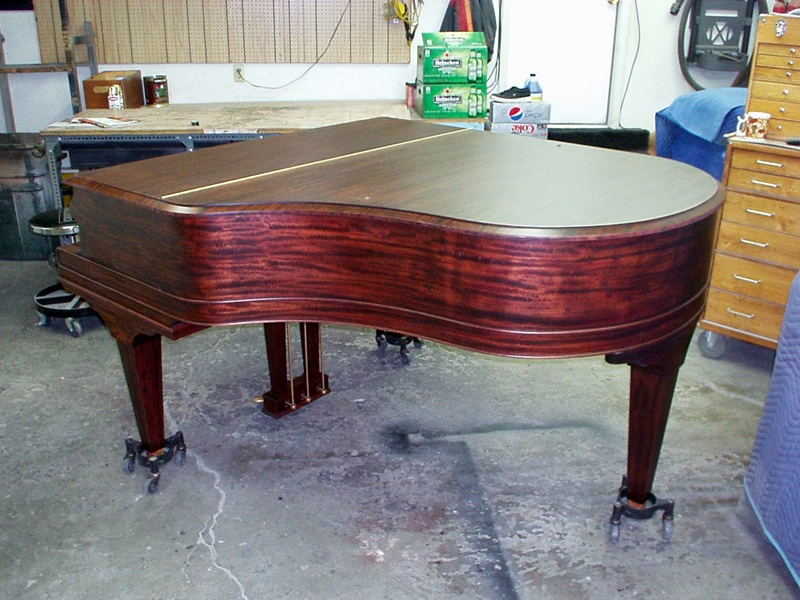 Dunkley Music completely restored this Bush & Lane grand piano.  Check out some the photos it.

The Bush & Lane Piano Company was established in 1901.  They were originally located in Chicago, Illinois.  After several years, a factory and offices were constructed in Holland, Michigan.  Bush & Lane produced some of the finest upright pianos ever made by an American manufacturer.  Bush & Lane was known for building exceptionally well made, heavily-built pianos that were extremely durable.  They offered a full line of upright pianos, player pianos, and grand pianos, all higher grand instruments that were sold all over the United States. Bush & Lane was especially well known for their elaborate cabinets and lavish use of exotic and rare woods.  Along with the Bush & Lane name, the company built other names including Victor, Farrand, Cecilian, and Paulus.

The “Bush” in Bush & Lane referred to the two Bush brothers of Bush and Gerts fame.  Those were money men working at the commercial end of the production spectrum. The design genius was Walter Lane, who, like Ernest Knabe, is all but forgotten and relegated to a mere footnote in the history of the American piano.  W.L. Bush was a founder of the Bush Conservatory of Music and was a industry lobbyist for requiring stencil brand pianos to show the builder’s name as well as the dealer’s.

Bush & Lane was noted for their massive cases, heavy cupular plate construction, and a series of soundboard, bridge, and framework innovations all designed to give them a quality of tone, projection, and carrying power second to none.  In this respect, the Bush & Lane could give similar vintage uprights produced by the likes of Steinway, Mason & Hamlin, Knabe, and Weber a real run for their money.  In a list of the top 10 pianos as far as tone-quality, projection, and carrying power, Bush & Lane pianos would be included amongst Steinway, Weber, Knabe, etc.

From first to last, the Bush & Lane company of Walter Lane was a first-class operation. They produced expensive, limited-production instruments of the highest quality. As they lived, so did they die. The crash of 1929 and the ensuing “Great Depression” killed off the piano industry almost overnight. In 1925, 3/4 of all the pianos made were player pianos. By 1930, they were almost all gone. Those companies that survived did so by merging with other companies and corporations such as Aeolian.

In 1930 Walter Lane had a decision to make. He could either return to making non-player pianos once again, and probably have to compromise quality in favor of economic survival like his competitors. He could sell out his corporate soul and reputation to Aeolian, like so many others chose to do. Or, he could simply call it quits, close up shop, and let his reputation rest on what he had accomplished during the preceding thirty years.  Lane chose the latter option and discontinued piano manufacturing in 1931.