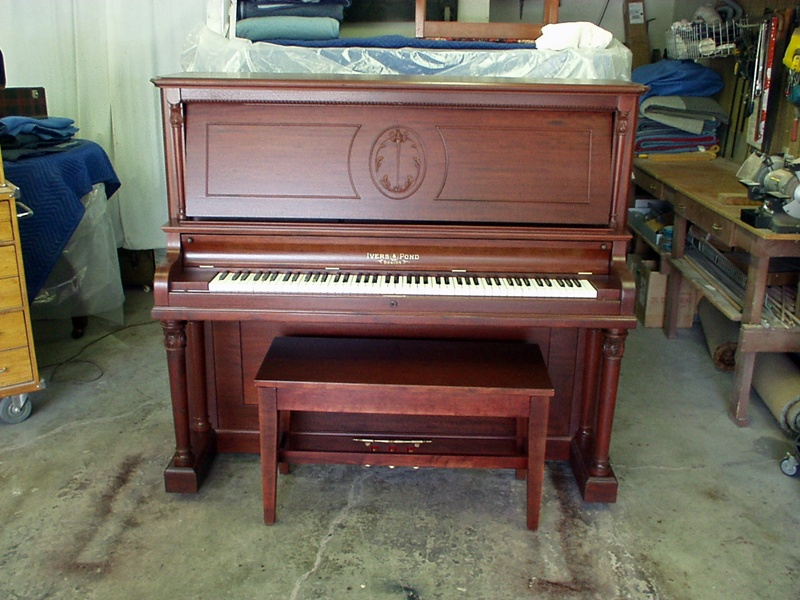 This Ivers & Pond Upright Piano had been neglected and stored in the garage for several years.  On top of that, it had been painted white.  We stripped the piano, rebuilt the interior, and completely refinished and restored it.  It looks like a completely different piano.

This is an Ivers & Pond Upright piano that we restored last year.

A piano long established and extensively advertised. Ivers & Pond pianos have gained a prominent position before the public and they are in every respect meritorious instruments, as are the player pianos of the same make. This old established, nationally prominent, and highly regarded concern continues with its policy of building only pianos of high quality. Incorporated in 1880. Made during the twentieth century by the Aeolian Company.

Ivers & Pond was located in Boston until the late 1920’s and then relocated to TX. Eventually they were bought out by Aeolian Piano Co.  They are one of the companies which maintained the traditions of famous Boston makers as they continued to produce pianos.
The Ivers & Pond piano is noted for its structural integrity, extreme durability and charming tone quality. It has always enjoyed a wide national distribution, and the house has never changed from the original corporate form chosen at the start.

Over seven hundred conservatories and schools and over eighty thousand homes throughout the country use Ivers & Pond Pianos. In years past the company has been one of the most extensive and consistent advertisers in the piano industry so that the name “Ivers & Pond” has become almost a household word in musical circles throughout the land. Many practical improvements and special features enhancing durability and tonal qualities have been developed in the Ivers & Pond factories and particular attention has been paid to artistic styling of the various piano types. The historic policy of this well-known house, of building quality instruments only, is being strictly maintained, as is also their principle of constantly striving to give greater value to the purchaser.