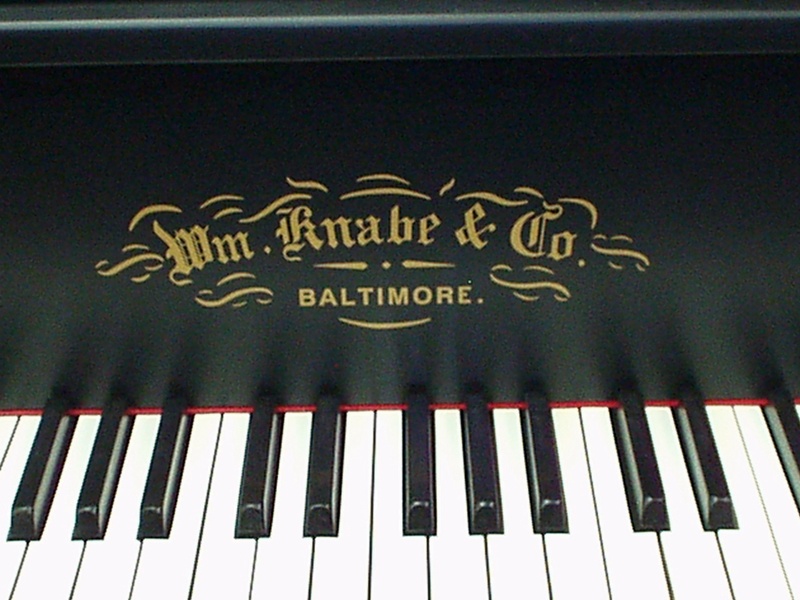 We refinished this Knabe Baby Grand Piano to a beautiful black satin. Check out the gallery below of the piano during the process. 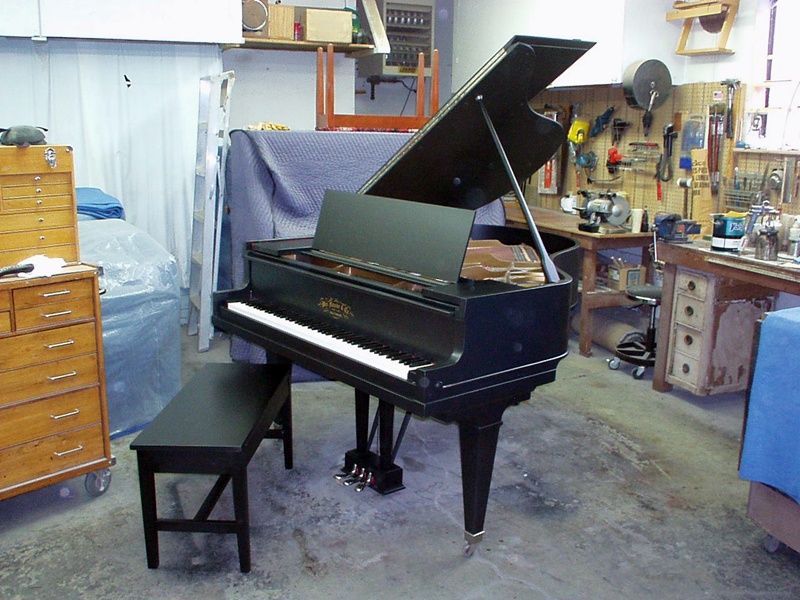 The distinguished American piano maker Knabe & Company was founded at Baltimore in 1839 by Valentine Wilhelm (William) Knabe (3 June 1803–21 May 1864). Born in Kreuzburg, Germany (now Kluczbork, Poland), Knabe was apprenticed to a cabinet and piano maker in Meiningen. In 1833 he came to Baltimore, where he worked for the piano maker and inventor Henry Hartye.

In 1839 Knabe formed a partnership with Henry Gaehle, manufacturing pianos under the name Knabe & Gaehle. In 1853 the firm displayed two pianos at the New York Exhibition. Knabe bought Gaehle’s interest in 1854 and continued making pianos with his sons Ernest J.(1837–1894) and William II (1841–1889). Later his son-in-law Charles Keidel was added to the partnership. By 1860 the Knabe Company had established itself as one of the finest piano makers in the country.

Before the outbreak of the Civil War, Knabe pianos dominated the Southern market, owing in part to the growing antipathy for articles manufactured in the North. The Civil War destroyed the market, and the stress and worry during the war years led ultimately to the death of the founder in 1864. His two sons continued the family business and built up a flourishing trade after the Civil War. William ran the factory while Ernest redesigned grand and upright stringing scales and assumed the responsibility for restoring finances.

The post-Civil War period was one of considerable growth and prosperity for the Knabe company. In 1870 approximately five hundred pianos were manufactured, but by 1890 annual production had quadrupled to two thousand instruments. Salesrooms were established in New York and Washington, D.C., while new factories, equipped with the most modern machinery, were built in order to keep up with growing demand. Knabe pianos were greatly admired during this period, winning numerous prizes. At the Centennial Exposition in Philadelphia (1876), a Knabe Concert Grand was particularly admired. In 1879 the Japanese government imported Knabe pianos for use in the public schools. The distinguished conductor and piano virtuoso Hans von Bülow used Knabe pianos exclusively during his North American tour in 1889. Many other famous artists, including Saint-Saëns, Busoni, and Arthur Rubinstein, were enlisted by the Knabe company, which also sponsored Tchaikovsky’s appearance as guest conductor to open Carnegie Hall in New York in 1891. On 23 May 1891, the Music Trades magazine observed: “Ernest Knabe will entertain Tschaikowsky, the Russian composer, on his visit to Baltimore.” Tchaikovsky wrote a glowing testimonial praising the Knabe piano for its “rare sympathetic and noble tone color, and perfect action.” After the early death of the founder’s two sons, the company was run by William’s grandsons, Ernest J.Knabe Jr. (7 July 1869–?) and William Knabe III (23 March 1872–1939).

In 1908 the Knabe Company was one of the first piano makers, together with Chickering and Mason & Hamlin, to be absorbed by the American Piano Company, founded by George C.Foster and W.B.Armstrong. Although Ernest J.Knabe, Jr., was elected president and William Knabe III vice president, the two brothers withdrew from the conglomerate in 1909 and organized the short-lived Knabe Brothers Company (1909–1914) in Norwood, Ohio.

The popularity of Knabe pianos continued to grow after the takeover by the American Piano Company; in 1916 annual production grew to three thousand instruments. The Knabe was selected as the official piano of the Metropolitan Opera in 1926. After the bankruptcy and subsequent reorganization of the American Piano Company, Knabe became part of the Aeolian American Corporation in 1932. The Knabe company ceased manufacture after the bankruptcy of the Aeolian American Corporation in 1985, and the Knabe name then passed to South Korean piano maker Young Chang, which manufactured Knabe pianos at its factories in South Korea and Tianjin, China. In December 2001 the Knabe piano line was bought by Samick Music Corp. Samick planned to reintroduce the Knabe piano in January 2003, basing their specifications on early examples of Baltimore-built Knabes.