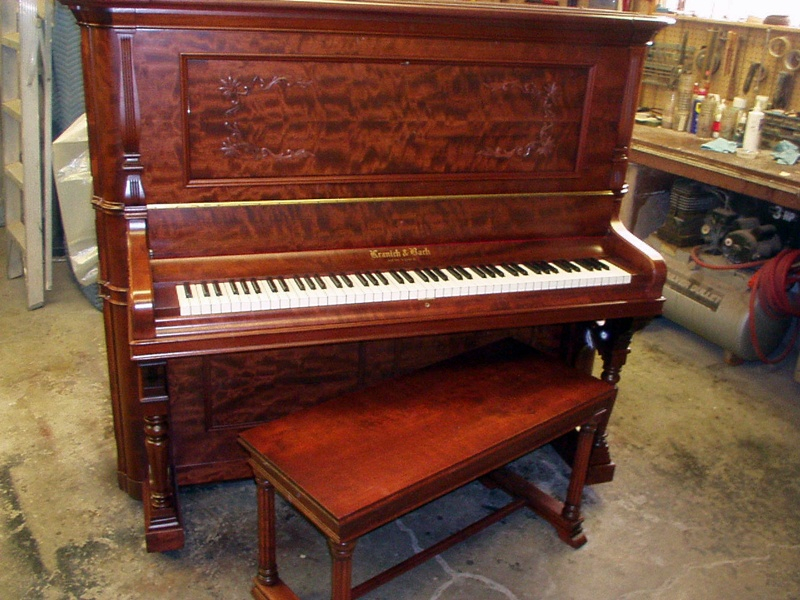 This was a beautiful antique Kranich & Bach Upright Piano that we completely refinished and restored. Check out the gallery of the pictures.

This antique Kranich & Bach is built out of gorgeous old English Black Walnut wood and has a beautiful grain.  The refinished wood accentuates the beautiful wood engraving on the piano.  Pictures do not do it justice.

This American company of piano makers was established by Helmuth Kranich (b.Gross-Breitenbach, Germany, 22 August 1833; d. New York, 1902) and Jacques Bach (b.Lorentzen, Alsace, 22 June 1833; d. New York, 1894). Kranich came from a musical family; his father, an organist of some note, placed him as an apprentice to a piano maker at an early age. He came to New York in 1851 at the age of eighteen, finding work with the piano-making firms of Bacon and Raven, Schomacker, and finally, Steinway & Sons, where he worked in the area of tone regulating for some five years. Jacques Bach, trained as a cabinet-maker, came to the United States at the age of twenty, finding work at the New York piano factory of Stodart and Morris in 1853. In April 1864 the two immigrants joined fifteen other aspiring piano makers to form the New York Pianoforte Company. Conceived as a co-operative venture, the firm did not succeed, and in 1866 six of the members withdrew under the leadership of Helmuth Kranich and Jacques Bach to form the firm of Kranich, Bach & Company. In 1890 the firm was incorporated, with Frederick and Alvin Kranich, sons of Helmuth, and Louis P.Bach, son of Jacques, serving as directors and officers. On the death of Helmuth Kranich, his son Frederick became president, Jacques Bach Schlosser, vice president, Helmuth Kranich Jr., secretary, and Louis P.Bach, treasurer. By 1916 the company’s capital stock was valued at $400,000.

The original Kranich & Bach piano was a high-quality instrument incorporating a number of improvements originated by its makers. The company also built a small grand piano of notable quality called the “Grandette.” During the ascendency of the player piano, Kranich & Bach designed and built player actions specifically for use in their pianos, as well as utilizing the Welte Mignon Licensee mechanism. In 1926 the company had factories and warerooms at 235–243 East Twenty-third Street, New York City, as well as warerooms at Michigan and Jackson Boulevards in Chicago.

In later years the firm was acquired by the Aeolian Corporation, and pianos under the Kranich & Bach name were made until at least 1981. In 1985 Aeolian Corporation went out of business and was purchased by Wurlitzer, with most of the names it controlled, as well as work in progress, equipment, and other resources, including the Memphis factory.In 1988 Wurlitzer was purchased by Baldwin, including most of the names previously owned by Aeolian, among which was Kranich & Bach. First given the name J. & C.Fischer, the piano was made for Baldwin in China by the Beijing Piano Company, only later changing the name to Kranich & Bach. The piano, a forty-two-inch console (model WP 50) is no longer in production; it was merchandised by Baldwin’s subsidiary Wurlitzer Division.

Several years ago two small grands, the C141 (4-foot 7-inch), and the C156 (5-foot 1-inch) were built for Baldwin by the South Korean piano manufacturer Samick under the name Kranich & Bach. Pianos bearing the Kranich & Bach name were also built by the Canadian piano-making firm of Mason & Risch. Established in 1871, Mason & Risch was taken over by Winter & Company, became a part of Aeolian briefly, and ceased operations in 1972. The name Kranich & Bach is currently owned by Baldwin.