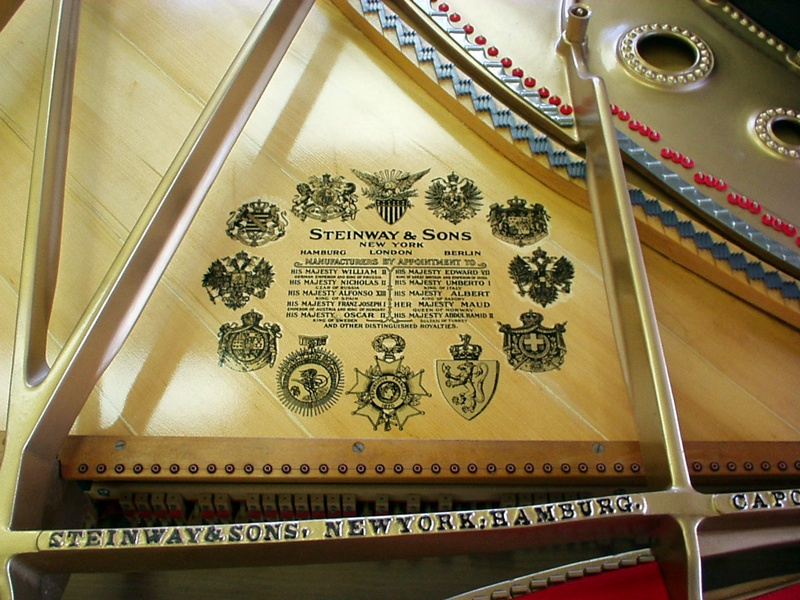 Dunkley Music restored this Steinway Grand Piano. It had been in storage for a while and had been banged up a little bit from moving. We completed refinished the piano and delivered it back to a marvelously updated living room where it became the show piece of the room.

Steinway & Sons of New York, one of the world’s best-known piano-manufacturing companies, has a long-standing reputation for the high quality of its products. Though its founder, Heinrich Engelhardt Steinweg (later Henry Engelhardt Steinway, 1797–1871), made pianos in his native Germany in the 1830s, Steinway & Sons came into being in New York.

Steinway & Sons soon enjoyed local success. A Steinway Square won a gold medal at a New York Mechanics Fair in the Crystal Palace in 1855, and Henry Jr. received his first patents for improvements to the grand action (U.S. Patent nos. 17,238, 5 May 1857, and 20,595, 15 June 1858). These served notice that the company aspired to influence, since few American makers made grands, let alone improved them. Chickering was the major exception, and it is a permissible speculation that even by 1857, Steinway & Sons had set its sights on the top ranking. In 1860 the company built a large factory at Fourth (Park) Avenue between Fifty-second and Fifty-third Streets, leaving small shops and lofts downtown. The new company would not simply drift in a conventional current; Henry Steinway’s sons were a vigorous, imaginative, ambitious lot.

Henry Jr.’s major innovation was the design of a cross-strung grand (U.S. Patent no. 26,532, 20 December 1859). Cross-stringing was well known for squares and small uprights, but Henry’s patent combined the one-piece iron frame (which Chickering had put into grands in 1843) with cross-stringing, which had not been done in grands. The new design won a first-rank medal at the London Exposition in 1862, and the first step toward an American hegemony in the piano trade was taken. In 1864 the company opened a building on East Fourteenth Street that housed offices and warerooms and, in 1866, added an important auditorium. Steinway Hall remained a major concert and lecture hall until it closed a year before Carnegie Hall was opened on Fifty-seventh Street in 1891.

The company was threatened with collapse in March 1865, when Henry Jr. and Charles died within three weeks of each other. Henry Sr. was then sixty-eight years old and apparently not active in the company, and William, the only active son, was only thirty. Heavy persuasion brought Theodore, the son who had stayed behind in Germany, to New York and into the partnership. A genius in design and invention, Theodore insisted on the most meticulous standards of construction. In 1867 Steinway and Chickering took the highest prizes (which was higher depends on which company is speaking) at the Paris Exposition, resulting in a growing American dominance of the worldwide industry.

One of Theodore’s innovations was the determination to develop the upright piano at the expense of the square. By 1865 squares had effectively been replaced in Europe by uprights, which took less floor space. Though other companies made uprights, Theodore sought to bring them to a new standard of excellence. He succeeded to the extent that Steinway & Sons made its last square in 1888, and in time other American makers rejected the square and adopted the upright. That the ascendancy of the upright was the best thing that could have happened to the piano is debatable. The square had the advantage of access to better actions than are possible in the upright, whereas the upright could live in rooms too small for the massive squares to which American makers were addicted.

Theodore Steinway made several other improvements in piano design among his forty-odd patents. Perhaps the most important were the duplex scale (U.S. Patent no. 126,848, 14 May 1872), in which the nonspeaking lengths of string between the tuning pins and the Capo tasto or agraffes at one end and the bridge pins and the hitch pins at the other were proportioned as partial tones to the speaking lengths of the strings to allow sympathetic enhancement of the tone; the “cupola frame” (U.S. Patent no. 127,383, 28 May 1872), which was intended to allow freer distribution of the sound from the soundboard and to place the bridges closer to the center of the soundboard; and a case laminated of eighth-inch planks (U.S. Patent no. 229,198, 22 June 1880), securely glued by use of an innovative rim-bending screw, which produces a lighter case that is claimed to improve tone by reflecting sound waves back across the soundboard. The patented screw, which holds the planks while the glue dries, is still used in the Steinway factory. One innovation, the Sostenuto pedal (the middle pedal on modern instruments), was proposed by Theodore in 1873, but Albert made it work and was granted the patents (U.S. Patent nos. 156, 388, 27 October 1874, and 164,052–164,054, 1 June 1875).

The company survived the depression of 1873–1877-perhaps in part through shrewd real-estate investment. William Steinway acquired land in Long Island City, across the East River. In 1873 the company moved part of the manufacturing process there from the Manhattan factory. The company built houses for workers and provided for stores, a church, a kindergarten, horse-car rail lines, a public bathing beach, and other amenities of community life, and the “Steinway” area of the borough of Queens, centering on Steinway Avenue, still retains a distinct flavor. A mansion on one of the properties (now on the Register of Historic Buildings) provided the family with summer relief from Manhattan for many decades.

The latter part of the nineteenth century saw a tremendous expansion of international trade. William Steinway’s financial acumen helped the company to reach a pinnacle of international reputation and of export success. A strong sales center in London, opened in 1875, assisted, and in 1880, William and Theodore opened Steinway’s Pianofabrik in Hamburg, not as a Steinway & Sons property but as their own, though it assembled Steinway & Sons pianos from parts supplied by Astoria. This factory, destroyed in 1943, came into the company’s possession after Theodore’s death in 1889 and, with a later factory, has been the source of Steinway pianos sold in Europe. Its products have always been subtly different from New York Steinways, notably in a smoother, less brilliant sound than the typical American Steinway tone. Theodore Steinway, who hated New York, took the acquisition of the Hamburg factory as an excuse to move back to Braunschweig, Germany, where he lived until his death. The connection of Steinway & Sons with the Grotrian firm of Braunschweig has often been confusing. When Theodore Steinway came to New York in 1865, he sold out to Grotrian and his associates, allowing them for a period of time to call themselves “Th. Steinwegs Nachfolger” (Theodore Steinweg’s successors). That is the only connection between the two companies, and, though the Grotrian company adopted the name Grotrian-Steinweg, a suit in the 1970s by Steinway & Sons led to an agreement that no pianos with the name “Steinweg” would be sold in the United States. Grotrian has never had any connection with Steinway’s Hamburg plant.

With Theodore’s death, only William, who had become president when the corporation was formed in 1876, remained of the founding generation. Several men of the next generation had come into the company: Charles Ziegler (1854–1893), who was the son of Dorette Steinway (1827–1900) and her husband Jacob Ziegler (1825–1897). Dorette Steinway Ziegler was a daughter of founder Henry E.Steinway. Charles Ziegler became manager of the London branch, and his brother Henry Ziegler (1857–1930) was in charge of design and construction in New York under Uncle Theodore’s supervision. Henry later became vice president. Charles G.Steinway’s three sons also took positions: Henry W.T. (1856–1939) came to be factory manager (but was invited out of the company in 1892); Charles H. (1857–1919) became president on his uncle William’s death in 1896; and Frederick T. (1860–1927) succeeded Charles H. as president in 1919 upon the latter’s death.

The twentieth century had its ups and downs for the company. It closed for a time during World War I, suspended manufacturing for two years during the depression in the 1930s, and was deflected to making glider parts, coffins, and small upright pianos for military use during World War II. During the war, the Hamburg plant kept going until Allied bombing in 1943–1945 stopped production, and production of pi-anos resumed in 1948. After the war, the London sales establishment, which had not been seriously damaged, encountered some customs and tax difficulties because its pianos had always been supplied from Germany, but normalcy brought business back to something approaching profitability.

The New York establishment had moved all the manufacturing from Fifty-second Street to Long Island City in 1910 and the offices and salesrooms moved to 109 West Fifty-seventh Street in 1925. A flourishing concert management, resting on a tradition begun with Anton Rubinstein’s famous North American tour under Steinway auspices in 1872 and continued with such artists as Ignacy Jan Paderewski in 1891, handled many of the best pianists in the world, and Steinway & Sons profited from commitments to play Steinways by many of the rest.

Like most piano companies, Steinway participated in the player piano boom during the 1920s, and like most, it was hard hit by the depression and the rise of the radio as the prime means of home entertainment in the 1930s. Toward the end of the 1930s, the company’s sales were mainly of pianos built in the early part of the decade and stored in the meantime. Though business began to look better during the 1960s, the market was not really lively, and profitability was insufficient to produce investable capital. In 1972 the stockholders (still almost all family members) decided to sell the company to CBS, and, though Henry and John Steinway continued in high management, the direction of the company came from elsewhere. That the Steinway piano remained in all respects what it had traditionally been is a matter of debate. The use for some years of a Teflon plastic bushing was the cause of controversy, and it was abandoned. Significant design innovations were few. Materials changed somewhat, For example, in the use of glues developed during World War II and the replacement of ivory by plastic key-covering, in accordance with U.S. law.

In 1985 a consortium of Boston business men, John P. and Robert M.Birmingham, and Bruce A.Stevens, purchased Steinway & Sons from CBS. No evident modifications in design have been made, but there have been efforts to streamline the manufacturing processes.

Steinway & Sons has never given out production figures, but one can estimate them from serial numbers. In 1880, when the Hamburg factory was opened, total annual production was about 2,000. By 1900 it had reached about 5,000 combined, and that has been an approximate average during the twentieth century, with New York producing about 3,000 instruments to every 2,000 from Hamburg. The company presented its one-hundred-thousandth piano to the White House in 1903 and its three-hundred-thousandth in 1938. The former is now in the Smithsonian Institution’s National Museum of American History, and its impressive case paintings by Thomas Dewing have been restored. The latter remains in the East Room of the White House. In 1987 number 500,000 was fitted in a case designed by Wendell Castle presented in a Carnegie Hall program in June 1988, where a number of Steinway pianists played it, and was then sent on a world tour.

In 1991 Steinway & Sons announced a collaborative effort with the Kawai company in Japan to produce the “Boston” piano, a good-quality, medium-priced piano designed by Steinway and manufactured under Steinway quality controls by Kawai. The Steinway company was purchased in 1995 by Kyle Kirkland and Dana Messina, investment bankers who had already bought the Selmer company of wind-instrument makers, and the two firms were joined as Steinway Musical Instruments, the stock of which is listed on the New York Stock Exchange under the symbol LVB. In 1999 Steinway bought two important suppliers: the Herman Kluge Company, a German key manufacturer, and the O.S.Kelly Foundry, the only piano frame foundry in the United States. Through its Boston Piano Company subsidiary, Steinway introduced grands and uprights in 2001 under the “Essex” name, manufactured in Korea by Young Change and priced below the Boston Piano models. In its almost 150 years of existence, Steinway & Sons has had an enviable name, wide acceptance of its instruments, and mixed commercial success.